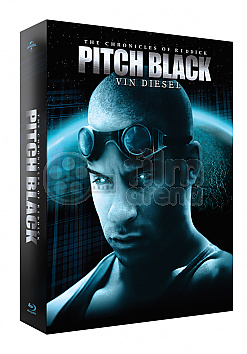 Start of pre-orders: October 15, 2020 (holders of permanent collector's numbers will be able to order 3 days in advance)

The space transport vessel "Hunter-Gratzner" carrying 40 people on-board crashes on a desert planet when the ship is struck in a meteor storm. There are only 11 survivors, among them are pilot Carolyn Fry (Who has assumed command after the ship's captain is killed), bounty hunter William J. Johns, religious man Abu Al-Walid, Antiques dealer Paris P. Ogilvie, runaway teenager Jack, settlers John 'Zeke' Ezekiel and his lover Sharon 'Shazza' Montgomery, and Richard B. Riddick, a dangerous escaped convict. Marooned, the survivors discover the barren and hot desert-scape has sunlight from three suns.

Not only must they find food and water and worry about Riddick, the survivors find themselves being hunted by the planet's flesh-eating alien inhabitants when the planet is engulfed in darkness, which happens every 22 years, as they emerge from underground to hunt and eat all signs of life. Fry and the survivors find Riddick is their best chance of survival, as Riddick has surgically-enhanced eyes that allow him to see in the dark as they set out to find a way of escaping from the planet and getting to a escape shuttle, before they all get eaten by the creatures on the surface.

The space transport vessel "Hunter-Gratzner" is carrying 40 people on board in cryo-sleep (suspended animation). Debris from a comet's tail pierces the ship, waking the crew and killing the captain. The ship is knocked into the atmosphere of a nearby planet, and docking pilot Carolyn Fry (Radha Mitchell) tries to control the descent, but the rear-heavy craft will not stabilize. She begins jettisoning aft sections sequentially, and navigator Greg Owens (Simon Burke) realizes she intends to jettison the passenger cabin as well, saying, "I'm not gonna die for them." He stops her by blocking the airlock, but in the sliding crash landing he is impaled by a metal shaft.

Carolyn apologizes to Owens, whom she assumes is dead, but he screams after she uncovers him. She orders a passenger to fetch painkillers from the medical kit, but they are missing. With Owens in terrible pain, Carolyn orders everyone out of the ship, and alone attends to him as he dies.

As Johns explores the wrecked ship, Riddick attacks him and must be rechained. Riddick dislocates his shoulders and escapes the ship. Zeke buries the dead as the survivors send out a search party. They find gigantic skeletons, and Carolyn confesses to Johns her attempt to drop the passenger section.

The find a small settlement, clearly abandoned by humans. Carolyn finds a model of the planet's solar system, and to their delight, a small shuttle spacecraft.

Back at the ship, the nervous group thinks that Riddick has returned. Zeke shoots and kills a man, who turns out to have been just a passenger. As Zeke continues grave detail, he is dragged screaming into a tunnel, leaving blood everywhere. Shazza runs to the grave and finds Riddick there looking as well. A brief chase ends when Johns tears off Riddick's protective goggles, blinding him with the sun, and Shazza knocks him out.

Carolyn questions the re-chained Riddick, who hints that he is no longer the group's biggest problem. As Carolyn looks at Riddick's peculiarly sensitive shiny eyes, the admiring Jack comes in and asks how to get eyes like that, since Riddick can see in the dark. Tethered by a safety line to the outside, Carolyn investigates deep inside the tunnel where Zeke disappeared, and finds his severed ankle and boot. As the planet's alien inhabitants threaten her, she attempts to escape. The group pulls her out, and then grabs her again as her tether pulls her back down into the hole.

Johns decides to unchain Riddick to labor for survival, promising him freedom. Riddick says Johns should kill him instead. The group packs up some belongings and heads to the settlement, bringing along a power cell from the wreckage for testing the spacecraft, while Riddick hauls a sled. At the settlement Carolyn calculates they will need 5 more power cells to operate the small ship. Shazza offers to repair the solar-powered sandcat to carry the heavy cells.

Jack shaves his head and dons a pair of goggles in emulation of his idol, Riddick. They determine that the settlement's former residents were geologists who left the planet. They try to rationalize the many items left behind, but Riddick states baldly that the former occupants are all dead. One of the young pilgrims enters a room and stirs up a nest of the aliens. Hearing his screams, the adults come and startle the flock of flying creatures who fly down into the coring shaft. They find and bury the boy's body. Shazza tries to apologize to Riddick for thinking he killed Zeke.

Carolyn finds a coring sample dated 22 years ago. She returns to the solar system model and they realise that every 22 years there is a total eclipse of all three suns, plunging the planet into complete darkness.

Johns insists to Carolyn they not fetch the power cells for the small ship until the last minute. He wants to prevent Riddick escaping by flying the ship, like he did for his last escape, killing the pilot. He intends to break his freedom deal with Riddick. Next, Riddick gets Carolyn alone and talks to her about his promised freedom, explains that Johns is a bounty hunter and not a cop, and hints about Johns' drug problem.

Carolyn finds Johns shooting morphine into his eyeball. He insists he never said he was a cop. She looks at his stash and is angry about Owens' painful death. He shows her the wounds he received from Riddick.

They see that the suns are actually going down. They ride the sandcat back to the crash site and load the power cells on it. Darkness falls suddenly, rendering the solar-powered cat useless. In the twilight they can see thousands of the aliens flying up into the sky. The passengers flee to the shelter of the ship, but Shazza and Riddick have to drop to the ground before reaching the ship due to the flying creatures. Shazza panics, and is torn in two and then carried off by the flying creatures when she tries to make a run for it. Riddick survives by laying low until the flock flies off.

As they explore inside the ship, which has now become a prison for them, Riddick finds aliens inside as well. Another young pilgrim stumbles into the room, runs in fear and dies. Johns shoots an alien, and they realize that the creatures' light-aversion is due to the fact that light actually burns them.

Carolyn wants to return to the shuttle in the dark, while Johns would rather wait for the suns to rise again. Carolyn points out that strategy did not work for the geologists. She decides Riddick can lead them with his night vision. Bringing as much light as possible, including glow tubes connected to a central machine on a sled, they head out.

Jack drops a flashlight and leaves the sled to get it, sparking an alien attack. Jack is saved, but Ogilvie panics and crawls away, breaking the entire glow tube system. They continue on and cross their own tracks, where Riddick states he needed time to think due to a canyon ahead, and states that "the girl" is bleeding. The group is stunned to discover that "Jack" is a girl masquerading as a boy to protect herself. In the subsequent argument Johns reveals Carolyn's treachery to the passengers.

As they walk ahead of the group, Johns asks Riddick to kill "Jack" to be a bloody decoy for the rest of the group. As they begin to fight, Carolyn orders the group to leave the sled. The fight continues and then the light goes out. Johns' bleeding wounds and movement draw an alien who kills him. Riddick finds the group again.

He studies an alien skeleton and realizes they have a blind spot. The Imam offers to pray with Riddick, and Riddick explains that he believes in god ... and hates him. He ties the power cells together to prepare to run the gauntlet through the canyon.

As they run, blue ichor drips down on them from the aliens fighting each other overhead in midair. The last boy pilgrim gets hurt, earning a bloody leg. Riddick keeps walking as if he is abandoning them, but "Jack" is attacked by an alien and Riddick turns back to save her, fighting it hand to hand. Suddenly it starts to rain, threatening what little light they have left. The last boy pilgrim is snatched by the aliens. Riddick finds a crevice for them to hide in, preserving their remaining light from the rain. He has Carolyn, "Jack" and the Imam enter, then pushes a boulder across the opening instead of entering.

Jack worries aloud that Riddick is leaving them, since he has the power cells. They find glowing slugs on the cave walls, and fill their empty bottles with them to make lamps. Carolyn leaves the cave and heads for the ship, which Riddick is preparing to launch. He opens the door for her, and then tries to persuade her to get on the ship and leave with him, abandoning the Imam and "Jack". She cries, saying that she can't. As she gets on the ship, an alien calls in the background, and she flashes back to visions of the passengers on the ship. She attacks Riddick and insists they go back for "Jack" and the Imam. He holds a knife to her neck and asks if she would die for them, and she says yes.

Back at the cave, the rock moves aside and Carolyn and Riddick are there to get "Jack" and the Imam. They run to the settlement, with Riddick lagging behind. An alien suddenly blocks his way between the buildings, and he sways back and forth with it, staying in its blind spot. Unfortunately, as he draws away, a second alien appears behind him and he is "visible". The others have hesitated at the ship, thinking him dead, but then they hear him yell. As Carolyn rushes towards the sound, Riddick drops down on the ground in front of her, bloody, wounded, gasping, but still clutching his knife. She tries to lift him to his feet, to get to the ship, but he is too big and heavy. She says "I said I'd die for them, not you." He is finally vertical when she is suddenly stabbed from behind by an alien, then pulled away into the air as it flies away with her. He collapses to the ground and says "Not for me," then shouts it.

The Imam and "Jack" chat as Riddick turns on switches, getting the ship ready to go, powering up the engines. Surprisingly, Riddick shuts the switches back off, prompting "Jack" to beg for take off as aliens are drawn to the now-dark area, menacing the ship. He explains they can't leave without saying goodnight. He powers up the ship's engines again and they take off, the bright light and the force of the engines kill aliens all around them as they exit the atmosphere. In space, "Jack" asks what they should tell the authorities about Riddick when they are questioned. Riddick tells her they should say he died on the planet.