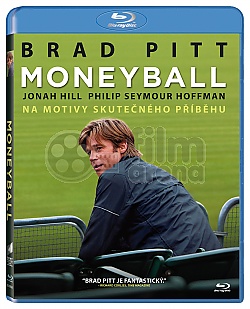 Oakland A's GM Billy Beane is handicapped with the lowest salary constraint in baseball. If he ever wants to win the World Series, Billy must find a competitive advantage. Billy is about to turn baseball on its ear when he uses statistical data to analyze and place value on the players he picks for the team.

Oakland Athletics general manager Billy Beane (Brad Pitt) is upset by his team's loss to the New York Yankees in the 2001 postseason. With the impending departure of star players Johnny Damon (Johnny Damon), Jason Giambi (Jason Giambi), and Jason Isringhausen to free agency, Beane attempts to devise a strategy for assembling a competitive team for 2002 but struggles to overcome Oakland's limited player payroll. During a visit to the Cleveland Indians, Beane meets Peter Brand (Jonah Hill), a young Yale economics graduate with radical ideas about how to assess players' value. Beane tests Brand's theory by asking whether he would have drafted him, Beane having been a Major League player before becoming general manager. Though scouts considered Beane a phenomenal player, his career in the Major Leagues was disappointing. After some prodding, Brand admits that he would not have drafted him until the ninth round and that Beane would probably have gone to college instead. Sensing opportunity, Beane hires Brand as the Athletics' assistant general manager.

The team's scouts are first dismissive of and then hostile towards Brand's non-traditional sabermetric approach to scouting players. Rather than relying on the scouts' experience and intuition, Brand selects players based almost exclusively on their on base percentage (OBP). By finding players with a high OBP but characteristics that lead scouts to dismiss them, Brand assembles a team of undervalued players with far more potential than the A's hamstrung finances would otherwise allow. Despite vehement objections from the scouts, Beane supports Brand's theory and hires the players he selected, such as unorthodox submarine pitcher Chad Bradford (Casey Bond). Following the free agent signings, Beane finds that he also faces opposition from Art Howe (Philip Seymour Hoffman), the Athletics' manager. With tensions already high between them because of a contract dispute, Howe disregards Beane and Brand's strategy and plays the team in a traditional style despite their unsuitability. Beane is eventually forced to trade away the lone traditional star player, Carlos Pea (Adrian Bellani), to force Howe to use the new recruits.

Early in the season, the Athletics fare poorly, leading critics within and outside the team to dismiss the new method as a dismal failure. Beane convinces the owner to stay the course, and eventually the team's record begins to improve. Ultimately, the Athletics win an unprecedented 20 consecutive games, setting the American League record. Their streak is capped with a victory over the Kansas City Royals. Like many baseball players, Beane is superstitious and avoids attending or sometimes even following games as they are in progress. His family convinces him to go to the A's game against the Royals, as Oakland is already leading 11 to 0 after the third inning and appears set to continue their winning streak. Beane arrives, only to watch the team go to pieces and allow the Royals to even the score. Finally, the A's do clinch the victory with a walk-off home run by one of Brand's picks, Scott Hatteberg (Chris Pratt). Despite all their success, the A's lose in the first round of the postseason, this time to the Minnesota Twins. Beane is disappointed, but satisfied at having demonstrated the value of his and Brand's methods.

In closing, the film notes that Beane passed up the opportunity to become the general manager of the Boston Red Sox, despite an offer of $12.5 million a year salary, which would have made him the highest paid GM in baseball history. Also noted is Boston's World Series victory soon after in 2004, based on the theories that Beane pioneered.