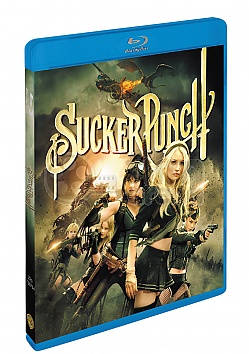 A young girl (Baby Doll) is locked away in a mental asylum by her abusive stepfather where she will undergo a lobotomy in five days' time. Faced with unimaginable odds, she retreats to a fantastical world in her imagination where she and four other female inmates at the asylum, plot to escape the facility. The lines between reality and fantasy blur as Baby Doll and her four companions, as well as a mysterious guide, fight to retrieve the five items they need that will allow them to break free from their captors before it's too late...

In the 1950s,[10] a 20-year-old woman[10] nicknamed Babydoll (Emily Browning) is institutionalized by her widowed stepfather (Gerard Plunkett) at the Lennox House for the Mentally Insane after she is blamed for the death of her younger sister. The stepfather bribes Blue Jones (Oscar Isaac), one of the asylum's orderlies, into forging the signature of the asylum's psychiatrist, Dr. Vera Gorski (Carla Gugino), to have Babydoll lobotomized so she cannot inform the authorities of the true circumstances leading to her sister's death. During her admission to the institution, Babydoll takes note of four items that she would need to attempt an escape.At the moment she is lobotomized, Babydoll slips into a fantasy world in which she is newly arrived in a brothel owned by Blue, whom she envisions as a mobster. She befriends four other dancers Amber (Jamie Chung), Blondie (Vanessa Hudgens), Rocket (Jena Malone), and Rocket's sister and "star of the show", Sweet Pea (Abbie Cornish). Dr. Gorski is envisioned as the girls' dance instructor. Blue informs Babydoll that her virginity will be sold to a client known as the High Roller (Jon Hamm), who is actually the doctor scheduled to perform the lobotomy. Gorski encourages Babydoll to perform an erotic dance, during which Babydoll further fantasizes she is in feudal Japan, meeting the Wise Man (Scott Glenn). After she expresses her desire to "escape", the Wise Man presents Babydoll with weapons and tells her that she would need to collect five items: a map, fire, a knife, a key, and a fifth, unrevealed item that would require "a deep sacrifice" but bring a "perfect victory". She then fights three samurai giants. As her fantasy ends, she finds herself back in the brothel, her dance having impressed Blue and other onlookers.Babydoll convinces her friends, including the dubious Sweet Pea, to join her in preparing an escape. She plans to use her dances as a distraction while the other girls obtain the necessary tools. During her dances, she imagines fantastic adventures that mirror the escape efforts. These adventures include infiltrating a bunker protected by steampunk-inspired World War I German soldiers to gain a map (mirrored by Sweet Pea copying a map of the brothel/institution from Blue's office); storming an Orc-infested castle to retrieve two fire-producing crystals from inside a baby dragon (mirrored by Amber stealing a lighter from the mayor's pocket); and boarding a train and combating robotic guards to disarm a bomb (mirrored by Rocket stealing a kitchen knife from the Cook's belt). During the last fantasy, Rocket sacrifices herself to save Sweet Pea and is killed when the bomb detonates, which is paralleled by the Cook fatally stabbing Rocket while she tries to protect her sister.Blue overhears Blondie relaying Babydoll's plan to Madam Gorski, confirming his suspicions that something is amiss. He has Sweet Pea locked in a utility closet and confronts the other girls backstage. He shoots Amber and Blondie and attempts to rape Babydoll, but she stabs him with the kitchen knife and steals his master key. Babydoll frees Sweet Pea and starts a fire to keep the orderlies occupied while they look for an exit. They escape into the courtyard, where they find a throng of men blocking their way. Babydoll deduces that the fifth item needed for the escape is in fact her own sacrifice. Despite Sweet Pea's protests, she insists on revealing herself to the visitors, thus distracting them long enough to allow her friend to slip away unnoticed.Back in the asylum, the surgeon has just performed Babydoll's lobotomy. The surgeon is baffled by Babydoll's expression, and asks Dr. Gorski why she authorized the procedure. Gorski realizes that Blue has forged her signature and summons the police, who apprehend Blue as he attempts to sexually assault a lobotomized Babydoll. While being led away, Blue also incriminates the stepfather. Babydoll is shown smiling serenely, having apparently found freedom within her own inner "Paradise". It is revealed her dream is actually a fantasy flashback paralleling events that really happened in the hospital.At a bus station, Sweet Pea is stopped by police as she tries to get on a bus to Fort Wayne, but she is rescued by the bus driver (the Wise Man), who misleads the police and allows her to board.

Copyright © 2020 filmarena.cz | Created by: tvorba webových stránek
We have 11223 products for you.