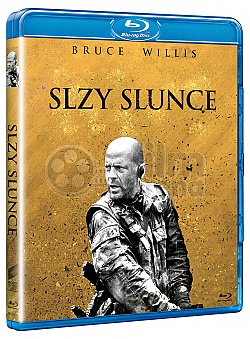 Tears of the Sun (Blu-ray)

Navy SEAL Lieutenant A.K. Waters and his elite squadron of tactical specialists are forced to choose between their duty and their humanity, between following orders by ignoring the conflict that surrounds them, or finding the courage to follow their conscience and protect a group of innocent refugees. When the democratic government of Nigeria collapses and the country is taken over by a ruthless military dictator, Waters, a fiercely loyal and hardened veteran is dispatched on a routine mission to retrieve a Doctors Without Borders physician, Dr. Lena Kendricks. Dr. Kendricks, an American citizen by marriage, is tending to the victims of the ongoing civil war at a Catholic mission in a remote village. When Waters arrives, however, Dr. Kendricks refuses to leave unless he promises to help deliver the villagers to political asylum at the nearby border. If they are left behind, they will be at the mercy of the enormous rebel army. Waters is under strict orders from his commanding officer Captain Bill Rhodes to remain disengaged from the conflict. But as he and his men witness the brutality of the rebels first-hand, they are won over to Dr. Kendricks' cause and place their lives at risk by agreeing to escort the villagers on a perilous trek through the dense jungle. As they move through the countryside on foot, Waters' team, experts at evasion and concealment, are inexplicably and ferociously pursued by an army of rebels. They are confounded until they discover that, among the refugees, is the sole survivor of the country's previous ruling family, whom the rebels have been ordered to eliminate at all costs. Waters and his small band of soldiers must weigh the life of one man against their own and the refugees they feel obliged to protect.

Tears of the Sun

A montage of news footage illustrating a violent coup that is taking place in Nigeria, overthrowing the Presidential family and establishing a dictatorship under the rebel general Yakubu. The Fulani rebels then begin a violent ethnic cleansing campaign against the Ibo (Eebow) tribes in the southern region. We then join a squad of SH-60B Seahawk helicopters on approach to the USS Harry S. Truman off the coast of Africa, and a news reporter on the flight deck reporting on the coup taking place. His report is interrupted by the news of the whole presidential family being assassinated by rebel forces.

Lieutenant Waters and his team of Navy SEALs disembark from a helicopter, returning from a mission to extract American citizens from the embassy. They are greeted by Captain Bill Rhodes on the deck who immediately informs them that they'll need to be reinserted to extract a critical personality immediately. After refitting for the next mission, eating and having their wounds tended by the medic they meet in the ships briefing room to get the details of their mission. They're instructed that they will Halo Jump over Cameroon and into the jungle outside of a small Catholic mission where they will find Dr. Lena Fiore Kendricks (an American citizen by marriage). Their secondary mission is to extract the priest and two nuns who run the mission if they are willing to go with them. Once they have their "package" they are to make a twelve kilometer hike to the designated extraction point where they'll be flown out by helicopter.

The mission begins precisely as planned with the SEAL team dropping from the aircraft and free falling over the target area. After forcibly having a young Nigerian woman lead the SEALs to Kendricks, Waters informs Kendricks of the rebel company approaching the mission and that their orders are to extract U.S. personnel. Kendricks refuses to leave the mission without the people under her care. Waters contacts Rhodes to explore their options and after a short and ambiguous conversation concedes to the doctor that they will take the refugees that can move under their own power with them. Kendricks agrees and immediately begins to round up every able-bodied refugee to make the hike. Irritated and behind schedule the SEALs start to move out with the refugees after daybreak. Their journey proves to be slow and hindered as guiding forty injured and wounded refugees is a difficult task.

After night has fallen they decide to take a short break to allow the refugees to rest and give Dr. Kendricks time to administer medication to those that need it. Waters has his team setup a defensive perimeter around the refugees. Moments after the perimeter is set, guerrilla rebels are rapidly approaching their position, with Waters stealthily killing a straggling tailgunner. Dr. Kendricks expresses her concern to Waters that the rebels are headed for the mission, but Waters is determined to carry out his orders and they continue on their way.

They finally reach their landing zone and contact the helicopters that are en route. When the choppers land, Waters' initial plan becomes clear as the SEALs suddenly turn on the refugees and hold them at gun point. Waters forces Dr. Kendricks onto the helicopter and the SEAL team collapses back for a swift extraction. The refugees are left stranded in the middle of the jungle without any protection against rebel forces.

During the flight back to the Truman, the helicopter crew and SEALS pass over the mission and discover that its been raided and destroyed just as Kendricks had predicted. Feeling a deep conviction, Waters orders the helicopter to turn around and regroup with the refugees. The SEALs decide on the spot to escort the refugees to the Cameroon border.

During the trip, the SEALs discover that they are being tracked by a large body of rebel soldiers while using satellite scans of the area. Their pursuers are having mysterious success in their tracking of the SEALs. As they continuously attempt to escape and evade the rebels, they encounter a small village that is in the process of being destroyed and the residents executed, raped and murdered by rebel soldiers. Realizing that they have an opportunity to stop it, Waters orders the refugees to remain on the high ground while his team assaults the village. They execute their plan with surgical precision, eliminating the threat. During the aftermath of the assault, the SEAL team becomes morally conscious after seeing the after-effects of the atrocities.

While continuing on their way, Slo determines that somebody within the group must be transmitting a signal that's allowing the rebels to identify their location and close in with incredible speed. It is then revealed that there is a surviving member of the Presidential family in their party, Samuel Azuka's son, Arthur, and that its very important for the rebels to ensure his death. A newer "refugee" is discovered in the group to have a transmitter on his person. He attempts to flee but is shot dead. Waters is angry at Dr. Kendricks because she knew all along about Arthur's true identity, yet never informed him.

The SEALs unanimously continue to escort the refugees no matter what the cost is. A massive fire fight breaks out between the SEALs and the hundreds of rebels hidden in the trees. Soon the SEALs form a defensive line against the rebels as they order the refugees to retreat to the tree line where the Cameroon border is in sight. Zee radios in to the Truman for air support and two F/A-18 Hornets take off from the flight deck en route to their location.

The SEALs continue to hold the line as they fall back to the refugees' location. However the overwhelming firepower of the rebels claims the lives of Slo, Flea, Lake and Silk. The refugees provide a small amount of cover fire as the remaining SEALs fall back into the reeds. During the battle, Waters, Red, and Zee are all wounded. The planes forming the airstrike radio in to their location. The SEALs mark the ground with a smoke grenade and order the pilots to fire on everything between the tree line and the smoke. Arthur and Dr. Kendricks are scrambling to the gate when they hear the thunderous roar of there bed on approach. They are terrified to see the planes drop a substantial payload on the rebel fighters. With the battlefield engulfed in fire, Arthur and Kendricks fear that the airstrike wiped out Waters' team.

Waters, Zee, Doc and Red emerge from the grass as helicopters land on the other side of the Cameroon border as Captain Rhodes orders the guards to open the gate and let the SEALs and refugees in. A group of Marines then escort the SEALs to the helicopters where their wounds are tended to. Dr. Kendricks says her goodbyes to her friends and departs on the same helicopter with Waters.

The final scene depicts the refugees recognizing Arthur as the tribal king and rightful heir to Nigeria, and he raises his hand exclaiming "Freedom!" as his fellow Nigerians celebrate around him. In the closing title, we see the quote "The only thing necessary for the triumph of evil is for good men to do nothing" by Edmund Burke.

Bonuses to Tears of the Sun BIG FACE ACTION (Blu-ray)