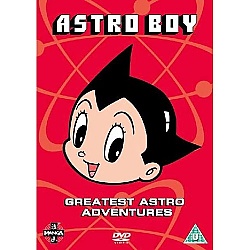 Set in futuristic Metro City, Astro Boy is about a young robot with incredible powers created by a brilliant scientist in the image of the son he has lost. Unable to fulfill the grieving man's expectations, our hero embarks on a journey in search of acceptance, experiencing betrayal and a netherworld of robot gladiators, before he returns to save Metro City and reconcile with the father who had rejected him.

In the future, the Metropolis of Metro City is suspended above the Earth using advanced technology. Situated through the city are numerous robots who do many of the chores and tasks for the human occupants. When a robot fails to have a use any longer, it is pitched over the side onto the cluttered landscape far below.

One day, after acing another quiz, Toby Tenma is being driven home by his family's robot butler, Orrin. However, Orrin explains that Toby's father, Dr Tenma, has a meeting at the Ministry of Science. Wanting to see his Dad in action, Toby temporarily reprograms Orrin to take him there.

Toby manages to sneak in, and comes across his Dad talking to President Stone, who has been working with Dr Tenma and Dr Elefun to create a Peacekeeping robot, the likes of which he hopes will help him be re-elected.

Dr Elefun explains that using a fallen star, he was able to synthesize both a positive and negative energy effect from this star. Stone is more intent on the use of the red core, and places this in the Peacekeeping robot, which soon turns it into a negative force, that begins to absorb other items to grow larger and increase it's weaponry.

The group manages to get behind a shield to stop the robot from destroying them, but Toby does not make it in time, and is vaporized by the robot, before Dr Elefun can shut it down.

Heartbroken over the loss of his son, Dr Tenma works in secret with Dr Elefun to create a robotic duplicate of Toby, using a strand of his son's hair and memories that have been stored away. Dr Elefun provides Tenma with the blue energy core to power the new Toby, who comes to life as if nothing had ever happened to him.

Tenma attempts to have Toby reclaim his original genius-level thinking, but Toby's mental power is more focused on some more fun things than actual study. When Toby retreats to his room, he sees some cleaner bots outside, and is surprised that he can understand them! Toby tries to take a closer look, but ends up falling out of his window. On the way down, he unknowingly activates rocket boots, and soon, joyously takes off in flight.

Returning home, Toby is dismayed when he finds Dr Elefun there, on orders from Dr Tenma to help him shut down Toby. Tenma has found it almost impossible to see the new Toby as his son, and thinks of him more as a machine than anything. Dr Elefun cannot bring himself to shut down Toby, and explains to the robot-boy that he probably has a destiny far outside of the world he has known. Toby then leaves, and flies off over Metro City.

Meanwhile, President Stone, still smarting over the fiasco with the Peacekeeping robot, is growing more and more disturbed that his eventual re-election seems unlikely. When his troops find Toby flying through the air, Stone is shocked, and assumes that the blue energy core that Elefun synthesized must be powering the boy. Stone orders his men to capture Toby, but they are outdone at every turn. Finally, Stone attempts to destroy Toby to get the blue core, but ends up blowing Toby off Metro City to the ground below. Stone then orders his men to scan the world below to find Toby.

Toby wakes up on a scrap pile of old robots, but soon is found by a group of kids, scavenging for old parts. Toby's introduction does not last long, when he is whisked away by three robots, claiming to be part of a group called the "Robot Revolutionary Front." The three members claim they have liberated Toby, and give him the nickname of "Astro." Toby eventually finds his way out of their grasp, but the RRF warns Toby to beware of a man named Hamegg, who they claim destroys robots.

Astro rejoin the group of kids, led by a girl named Cora. He finds their home where a number of wayward kids live, and are supervised by Hamegg himself. However, Astro is relieved when Hamegg explains to him that he loves robots, and works to fix them up.

The next day, the kids along with Astro go looking for spare parts. They come across a giant robot that has been non-functioning for some time. Unseen by the kids, Astro uses the power of his blue core to revive the giant robot, known as Zog.

The kids greatly impress Hamegg when they return with the enormous robot. They then proceed to clean him up and paint him up.

Later that evening, Astro finds Cora attempting to call her parents in Metro City, but she claim she can't get through, and wonders if they have forgotten her.

The next day, the group along with Hamegg, take Zog to the Robot Wars. Astro is further shocked to find that Hamegg rebuilds robots as fodder to fight in the wars. Hamegg claims that since robots have no emotions or feelings, it shouldn't matter...right before he zaps Astro, rendering him unconscious. This move shocks Cora and the others, until Hamegg explains that he knows that Astro is really a human-looking robot.

Hamegg then pits Astro against other robots in the Robot Wars arena. Astro tries not to fight, but soon finds himself being forced to do so against the other combatants. Hamegg then sends Zog to fight Astro, but the giant robot refuses, due to being helped/powered up by Astro. When Hamegg zaps Astro trying to force him to fight, Zog attempts to break the first rule of robotics and destroy him, until Astro intervenes.