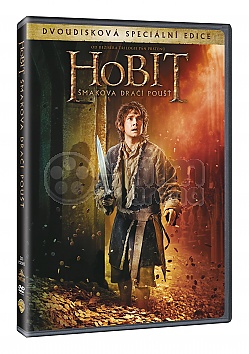 The Hobbit: The Desolation of Smaug

After successfully crossing over (and under) the Misty Mountains, Thorin and Company must seek aid from a powerful stranger before taking on the dangers of Mirkwood Forest--without their Wizard. If they reach the human settlement of Lake-town it will be time for the hobbit Bilbo Baggins to fulfill his contract with the dwarves. The party must complete the journey to Lonely Mountain and burglar Baggins must seek out the Secret Door that will give them access to the hoard of the dragon Smaug. And, where has Gandalf got off to? And what is his secret business to the south?

The Hobbit: The Desolation of Smaug

In a flashback set in the town of Bree on the border of the Shire, Thorin Oakenshield (Richard Armitage) arrives at the Prancing Pony, orders a meal, and notices that he's being watched. The watchers withdraw when Gandalf the Grey (Ian McKellen) joins Thorin, who he urges to obtain the Arkenstone. The stone will enable Thorin to reclaim the dwarves' lost kingdom of Erebor and become King under the Mountain. Gandalf suggests recruiting a burglar to steal the Arkenstone from the dragon-guarded mountain.

Twelve months later, not long after the end of the previous film, Bilbo (Martin Freeman), Gandalf, Thorin and the Dwarven company are chased by the orcs down from the Carrock, where they encounter a huge bear. Gandalf urges the company to seek refuge in a nearby house. They make it there just barely ahead of the bear -- which, once the doors are safely barred, Gandalf reveals to be their host. Beorn (Mikael Persbrandt) is a skin-changer who can take the form of a man or a bear. Remarking that he dislikes dwarves but really hates orcs, Beorn loans his horses to the company so that they can outrun the pursuing orcs.

Azog (Manu Bennett), the leader of the orcs, is summoned to Dol Guldur where he is given command of the armies by the Necromancer (voice: Benedict Cumberbatch). Azog gives his son, Bolg (Lawrence Makoare), the task of hunting the dwarves.

Gandalf departs as the others enter Mirkwood, urging Bilbo and the dwarves not to stray from the forest path and to wait for him before entering the mountain. After losing their way in the forest, the dwarves are captured by giant spiders. Bilbo, with the help of his sword (which he names Sting during this encounter) and the One Ring, manages to free them from the webs of the spiders. However, while fighting the attacking spiders, the dwarves are captured by Wood-elves led by Tauriel (Evangeline Lilly) and Legolas (Orlando Bloom), the son of the Elven King Thranduil (Lee Pace). Thorin holds a grudge against Thranduil for refusing the help the dwarves after the dragon drove them out of the Lonely Mountain, and he refuses to negotiate. Thus he and the other dwarves are locked up. Bilbo, however, uses his ring to escape the elves' notice and follows the prisoners to their dungeon.

Kili (Aidan Turner) falls for Tauriel, who seems intrigued by him. Legolas is also sweet on Tauriel, but she's been told by King Thranduil to discourage him; Legolas is not for the likes of her.

Under the cloak of his ring, Bilbo steals the jailer's keys and helps the dwarves to escape from the halls of the Wood Elves using empty wine barrels, in which they float down the river. Along the way, they are attacked by Bolg and his band of orcs, who had been lying in wait. When Kili tries to open the river gate, the orcs wound him with a poisoned arrow. Tauriel and Legolas, sent to chase down the escaping dwarves, end up helping them fend off the orcs.

On the riverbank Bilbo and the gang meet Bard (Luke Evans), a bowman and descendant of the original lord of Dale, who was waiting to collect the empty barrels in his barge. They pool their coins to bribe Bard to smuggle them into Lake-town, where they scorn the makeshift weapons Bard provides and consequently are captured trying to steal better weapons from the town armory. They're taken before the Master of Lake-town (Stephen Fry), where Thorin convinces the townsfolk and the Master that the dwarves will share the riches of the recaptured mountain with Lake-town. The adventurers receive a grand send-off, but Thorin makes Kili stay behind because his wound is slowing him down -- in fact, it's getting worse. Oin (John Callen) and Kili's brother Fili (Dean O'Gorman) stay with him, and Bofur (James Nesbitt) stays too because he passed out under the table during the feast and misses the boat.

Meanwhile, the Elvenking learns from a captured orc that Sauron has returned, and so decides to seal off the Elf Kingdom to protect it from the impending evil. However, Tauriel leaves to help the injured Kili and a concerned Legolas gives chase. In a sheltered nook high on the slopes of the Lonely Mountain, Bilbo deciphers the clue on Thorin's map about the last light of Durin's Day and uses the moonlight to find the hidden keyhole. Thorin unlocks the secret door into the mountain.

After entering, Bilbo attempts to steal the Arkenstone by himself, but is discovered by the awakened dragon, Smaug (voice: Benedict Cumberbatch). At the same time, Gandalf, after sending Radagast away with a message for Galadriel, knowingly steps into the orc-ambushed Dol Guldur and engages the Necromancer in a fierce battle. During the battle, the Necromancer appears to Gandalf as the Eye of Sauron, revealing his true identity. The battle ends with Gandalf's capture.

Tauriel and Legolas arrive at Lake-town in the nick of time to fight off the orcs, who have tracked the dwarves to Bard's house. Legolas goes off after Bolg, sparring with him on the floating byways of Lake-town before embarking on a mounted pursuit on land. Tauriel attends to the wounded Kili using her healing magic and some kingsfoil that Bofur scrounged out of a pigsty. Sensing that the dragon is coming, Bard sets off to load the last Black Arrow into the town's Windlance (a big crossbow mounted on a tower) so that it can pierce the weakened spot in the dragon's armor. (The weak spot is a missing scale, courtesy of Bard's ancestor Girion, last lord of Dale.) Bard is captured by the Master's men, but not before handing off the Black Arrow to his son Bain (John Bell), who hides it in a small boat.

The dwarves enter the mountain to help Bilbo. Tricking Smaug into rekindling the forge using his fiery breath, the dwarves attempt to kill the dragon by drowning him in molten gold. However, Smaug escapes from the mountain and takes to air, shaking off the gold coating. Smaug has deduced that the dwarves had help from Lake-town, and he's determined to make Lake-town regret it. Bilbo watches Smaug fly off into the night to wreak havoc.