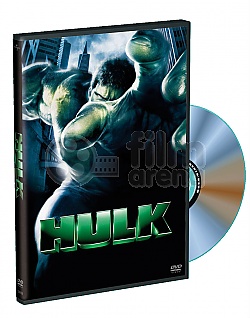 Bruce Banner, a brilliant scientist with a cloudy past about his family, is involved in an accident in his laboratory causing him to become exposed to gamma radiation and Nanomeds (A tiny life-form that is supposed to heal wounds but has killed everything with which they have made contact). Confused and curious about his survival, Banner discovers that since the accident, whenever he becomes angry he transforms into a giant green monster destroying everything in sight in an act of fury. Bruce's mysterious past and the answer to why the radiation had this effect becomes revealed to him as his Birth Father David Banner intervenes with hopes to continue experimenting on him.

Bruce Banner (Eric Bana) is a research scientist at a Berkeley, California laboratory. His work focuses on using nanomeds and gamma radiation to cure cancer and other diseases. Unfortunately, all of their experiments end in the test animals exploding. He works with Betty Ross (Jennifer Connelly); they were recently romantically involved but have broken up because Bruce was too withdrawn emotionally. Although neither of them know it, their fathers worked together on an Army base in New Mexico, in the late 1960s. David Banner (Paul Kersey) was a driven research scientist intent on unlocking the secrets of regeneration of tissue so that humans could regrow lost limbs. Sgt. Ross (Todd Tesen) shut down Brian's experiments when he learned he had been experimenting on himself. David was aware of the risks and already feared that he had passed on some genetic mutation to young Bruce. Bruce was a quiet, troubled child who was comfortable only in the presence of his mother, Edith (Cara Buono). After being fired, David sabotaged his equipment which resulted in an explosion on base. He then went home, fought with Edith and tried to kill young Bruce. Instead he accidentally killed Edith. David was arrested and incarcerated in a mental hospital. Bruce was placed with foster parents. He has repressed his memories of his parents, and because Bruce works under his foster parents' name (Krensler), Betty's father doesn't recognize him. Ironically, Ross oversees the research Betty and Bruce perform.

Glenn Talbot (Josh Lucas) used to work for the same lab as Betty and Bruce but has since moved on to a private corporation. He returns to the lab, flirts with Betty and offers her and Bruce an unlimited budget if they will bring their research to his corporation. They both refuse but Bruce's anger begins to rise anyway. Later that day, an experiment goes horribly awry. Bruce is exposed to massive doses of nanomeds and gamma radiation. Unlike the other test subjects, however, he doesn't die. In the hospital he is visited by a strange man who had earlier begun to work at the lab as a janitor. Although Bruce doesn't recognize him, it is his father (Nick Nolte). His father suggests that Bruce has secret reserves of power hidden within him, then disappears. After being released from the hospital, Bruce returns to work. He hears a phone message from Betty in which she discusses a meeting she had with now-General Ross (Sam Elliot) about Talbot's offer. Bruce's rage spirals out of control and he transforms into the Hulk, a superhumanly powerful, green-skinned creature. He destroys the lab and throws the gamma radiation generator into the parking lot. When he sees his father observing his rampage, the Hulk leaps away in confusion.

Because Bruce was the last person in the lab, he is under suspicion for destroying it and is placed under lockdown by Ross. Betty goes to see David. He tells her as well about Bruce's power before curtly showing her the door. Upset, Betty drives to her cabin in the mountains. David has created a trio of superpowered gamma dogs using equipment purloined from the labs. Using a scarf she left behind, he gives the dogs Betty's scent and sends them to kill her. He then calls Bruce to tell him he has done this, to coax the Hulk out of him. Just then Talbot arrives to confront Bruce. Ross has ordered Talbot to leave Betty and Bruce alone, enraging Talbot. He tries to beat Bruce but manages only to anger him enough to cause another transformation into the Hulk. Hulk beats Talbot badly then escapes the Army guards to find and protect Betty. At the mountain cabin, he fights and kills the gamma dogs. Exhausted, he transforms back into Bruce before Betty's eyes. The next morning, the Army arrives and sedates Bruce. Betty, unsure of what to do, had called her father during the night.

By now Ross knows who Bruce is. He has Bruce and Betty taken back to the New Mexico base where David and he had worked earlier. Betty and Bruce walk the grounds in an attempt to understand how Bruce became who he is. Before any real breakthrough can be made, Ross' superiors place Bruce in Talbot's care. Talbot has assured them he can find out what causes Bruce to become the Hulk, and harness that power for the military. Betty leaves the base. Talbot taunts Bruce then knocks him out. Bruce is placed in an isolation tank so Talbot can perform tests on him. As Talbot probes, however, he unleashes the Hulk. The Hulk breaks free of the tank and begins to wreak havoc on the Army base. In the process, Talbot is killed. Ross decides to free Hulk from the base and then destroy him outside. Hulk leads the Army on a chase throughout the Southwestern United States, heading in the direction of San Francisco. There he proceeds to wreak havoc in the city until Betty arrives and calms him down. He transforms back into Bruce.

David uses the restored gamma radiation generator and nanomeds to make himself into a superhuman being. He is now able to adopt the physical properties of anything he comes in contact with. He contacts Betty and agrees to turn himself in to Gen. Ross if he will be allowed to see Bruce. Ross agrees. Father and son meet in an abandoned warehouse. David tries to persuade Bruce to accept his power and join him but Bruce refuses. David taps into a powerline and becomes living electricity. Bruce transforms into the Hulk and the two men battle. They eventually wind up at a secluded lake. David decides to absorb all of Bruce's power for himself. However Bruce's power is so immense, David cannot contain it all and explodes. As that happens, the Army drops a bomb on the site, destroying it.

Bruce's body is never found. Ross keeps in touch with Betty and hopes that if Bruce were ever to contact her, she would tell him. But he knows she wouldn't. In a South American rain forest, an American doctor provides inoculation shots to the needy. Mercenaries attack his camp to confiscate the supplies. As he eyes begin to glow green, Bruce warns them not to make him angry.

Copyright © 2020 filmarena.cz | Created by: tvorba webových stránek
We have 11216 products for you.