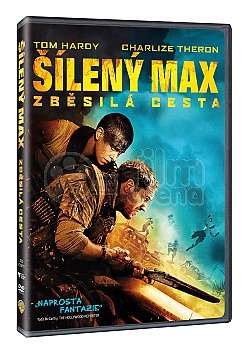 An apocalyptic story set in the furthest reaches of our planet, in a stark desert landscape where humanity is broken, and almost everyone is crazed fighting for the necessities of life. Within this world exist two rebels on the run who just might be able to restore order. There's Max, a man of action and a man of few words, who seeks peace of mind following the loss of his wife and child in the aftermath of the chaos. And Furiosa, a woman of action and a woman who believes her path to survival may be achieved if she can make it across the desert back to her childhood homeland.

Max Rockatansky (Tom Hardy) opens with a voice-over narration that he was once a cop and road warrior and is now trekking through post-apocalyptic Australia, running from the haunting thoughts of his dead wife and child, and the other dead people he's encountered. A two-headed lizard crawls up near Max, and he stomps on it before eating it. He drives off and is quickly pursued by a group of scavengers called the War Boys, who are all pale and covered in blisters due to a radiation sickness. They chase Max through the desert and cause him to crash before they capture him.

The War Boys take Max to their location and shave his head and face. They tattoo his back and try to use him as a blood bag since he is a universal blood donor (Type O). Max is nearly branded with an image of a skull engulfed in fire until he breaks free and runs from the War Boys. Max continues to see images of the dead before he makes it to an exit that's high above the ground. He jumps out and latches onto a hook, though he keeps swinging in the direction of the War Boys and they manage to pull him back toward them.

In the Citadel, there is a large community of survivors lorded over by the leader of the War Boys, Immortan Joe (Hugh Keays-Byrne; who also played the villain Toecutter in the original "Max Max" film). Joe wears a grotesque face mask made of horse teeth to help him breathe from his damaged lungs. He supplies the people with some water, making everyone go crazy and fight for it once Joe shuts it off. He warns the people not to become addicted to water so that they do not go mad over its absence. Joe then sends his commander Imperator Furiosa (Charlize Theron) out in a huge War Rig to collect gasoline from Gas Town, along with a group of War Boys.

On the road, Furiosa diverts from the path to Gas Town (glimpsed as oil refinery region) and heads east. Joe is alerted to the movement and runs into his chambers where he keeps his Five Wives (women chosen to breed his children). Nobody is there, but his finds writings that say "Our children will not be warlords" and "Who killed the world?" An old woman stands alone telling Joe that he cannot own a human. Furiosa is taking the women away from Joe, prompting him to rally the War Boys and go after her. One of the War Boys, Nux (Nicholas Hoult), is using Max as his blood bag and jumps at the chance to go after Furiosa so that Joe can bring him to the gates of Valhalla.

The War Boys ride after the Rig. Nux straps Max to the hood of his car and eagerly chases Furiosa alongside the others. They attempt to get close to the Rig, but Furiosa shakes most of them off. Nux gets close to the Rig as Max attempts to break free. Furiosa drives toward a huge oncoming sand storm. Nux continues to chase after her, even as they head into treacherous sand tornadoes. A few War Boys get killed in the storm, while Nux and Max are spun out of control, causing them to crash.

Max awakens to find himself still chained to an unconscious Nux. He grabs a rifle and tries to shoot off Nux's wrist, but the gun is jammed. He walks around the rig to see five beautiful women - Splendid Angharad (Rosie Huntington-Whiteley), Toast The Knowing (Zoe Kravitz), Capable (Riley Keough), Cheedo The Fragile (Courtney Eaton), and The Dag (Abbey Lee) - cleaning themselves with a hose. Angharad is nine months pregnant with Joe's child, and Dag is also carrying his baby. Max holds the rifle at the women for them to give up the water. He sprays a bunch in his mouth and then makes them get the cutters to break off his chain. Dag tries to but cannot break it. Furiosa sees from the distance that Joe has gathered reinforcements from the other towns that supply gas and ammunition to the Citadel, led by The People Eater (John Howard) and The Bullet Farmer (Richard Carter). Max and Furiosa fight as he tries to break himself off Nux. Nux wakes up and helps Max fight Furiosa. Nux breaks off the chain and Max tries to take the rig for himself. However, it stalls because Furiosa installed a killswitch and only she knows how to keep it going. Max lets her back on the rig but he doesn't want to take the rest of the women. Furiosa insists that they join him, as she is guiding the women to a location from her youth called The Green Place. They ride off while Nux sneaks on board.

Furiosa drives the Rig up to a canyon where a group of Biker bandits await for their payment in gasoline. They spot Joe and his forces coming in close. Furiosa drives the Rig away while the Bikers blow up the overpass to block Joe out. Another chase ensues through the desert. The War Boys keep trying to overtake the Rig while Joe is catching up faster. He attempts to shoot at the Rig until Angharad steps out as a human shield, and Joe cannot do a thing without hurting his potential son. Nux attempts to help Joe, who sprays chrome paint on Nux's mouth with the promise of bringing him to the gates of Valhalla if Nux succeeds. Almost immediately, Nux loses his gun in front of Joe, who continues driving with disappointment. Angharad tries climbing back to the front of the Rig, but she falls off and is run over by Joe's car. The women tell Max to turn back, but when he tells Furiosa that Angharad went under the wheels, Furiosa says they must keep going. The other cry for Angharad.

Nux slips back into the Rig with the promise of helping the women evade Joe. He lays on the floor, distraught that he has failed Joe yet again and has lost his chance of joining his personal army. Capable sits and consoles him. At the front, Furiosa tells Max of The Green Place and how she was taken from it as a child.

As they continue driving through the night, the Rig gets stuck in a big mud pile. The Bullet Farmer is not far behind them. Max shoots at him but misses, and then Furiosa gets a clean shot, taking out The Bullet Farmer's lights and blinding him.

Meanwhile, Joe's lieutenant Slit (Josh Helman) takes Angharad's body, as she is near-death, and he cuts the baby out of her stomach. The baby is dead too, but he tells Joe that it was a boy. Joe tells his son Rictus (Nathan Jones) that he had a brother. Rictus screams proudly. The women continue trying to get the Rig out of the mud while Max goes out to face The Bullet Farmer himself. He returns with The Bullet Farmer's blood on his face, along with a nice supply of guns and ammo.

In the morning, the Rig comes up to a tower where a naked woman, The Valkyrie (Megan Gale) is screaming. Max thinks it's a trap, but Furiosa steps out and tells The Valkyrie her mother's name and her affiliation with this clan. The Valkyrie climbs down the tower and puts on a robe. More older women, the Vuvalini, emerge. The eldest Keeper of the Seeds (Melissa Jaffer) recognizes Furiosa. She tells them that she is taking the women to The Green Place, but the Keeper of the Seeds informs her that the muddy swamp they passed through WAS The Green Place, and it is uninhabitable. Furiosa walks into the sand and falls on her knees, screaming in despair. The Vuvalini agree to help the women ride through the salt flats in search of a home. Max, still haunted by the images of his wife and child, decides to help the women go back to the Citadel since Joe's greenery and water supply are currently unguarded. They also plan to trap him and his army in the canyons.

The whole group rides back in the direction of the Citadel. Joe sees them riding from his telescope, knowing full-well what their plan is. He gathers his army and gives chase. The Vuvalini help fight back. The Valkyrie shoots at the War Boys while defending one of her own until she is run over. Max and Furiosa kill some of the War Boys, while Max gets Joe to kill The People Eater by using him as a human shield. The Keeper of the Seeds is also killed when one of the War Boys cuts her neck. Toast is captured by Joe and held hostage. Furiosa is impaled and gets weaker as Joe and Rictus gain momentum. Toast distracts Joe long enough to give Furiosa an opportunity to hook Joe's mask onto the wheels of his car. She growls, "Remember me?" to him as the wheels rip the mask and Joe's face off, killing him. The Rig then heads toward the canyon, with Rictus still trying to kill the group. The women get off safely while Nux says goodbye to Capable and swerves against the canyon, sacrificing himself to kill Rictus and collapse the overpass to put an end to Joe's army.

On the way back to the Citadel, Furiosa's lungs nearly collapse. Max punctures a hole in her side to give her air. She starts to lose consciousness, and Max starts to give her a blood transfusion. He tells her his name as she closes her eyes.

The group arrives at the Citadel. Max presents the people with Joe's mouthless corpse, making everyone cheer. They rip Joe's corpse apart and feed off him. The water supply is brought out, giving the people as much water as they need. Furiosa rises and apparently becomes the new leader. She and Max acknowledge each other with respect once more before he slips away into the crowd to continue down his own path.