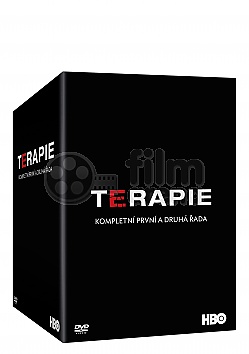 The THERAPY series is unique for its psychological depth, well developed characters and the setting, mostly concentrated in one area. Most of the story takes place in the consulting room of psychologist Marek Posta (Karel Roden) who attends to several patients with a variety of traumas during the weekdays. Every Monday the psychologist receives a saucy Sandra (Tatiana Pauhofová) who confesses in the opening episode that she is in love with Marek. On Tuesday it is the turn of a former soldier returned from Afghanistan (Lukás Hejlík) who reveals his traumas from the war and from being brought up by his father. On Wednesday the psychologist meets a young gymnast, Linda (Michaela Doubravová) whose pretended pubertal self-confidence masks an inner vulnerability. On Thursday he is visited by a married couple (Ana Geislerová and Martin Hofmann) who cannot decide whether they should have an abortion. Every Friday the protagonist visits his older colleague, Dita, to discuss his uncertainties and family problems. Dita is portrayed by the well-known Slovak actress Kamila Magálová. The psychologist's wife, with whom he is going through a family crisis, is played by Klára Melísková. Their teenage daughter, with whom Marek does not have much in common, is played by Berenika Kohoutová.