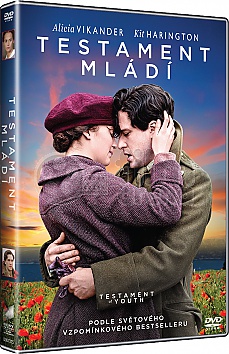 A British woman recalls coming of age during World War I - a story of young love, the futility of war, and how to make sense of the darkest times.

Testament of Youth is a powerful coming-of-age story which tackles love, war, loss and remembrance. It's based on the beloved WW1 memoir by Vera Brittain, which was a bestseller on publication, heralded as the voice of a generation and has become the classic testimony of that war, from a woman's point of view. Vera's story encompasses vast themes - youth, hope, dreams, love, war, futility, and how to make sense of the darkest times. It's a key witness account of WW1, which continues to resonate because it is above all a personal story of how one person faces war and tragedy, and rises above them.

The story begins in the Edwardian spring of 1914, with Vera Brittain - a youthful feminist, free-minded and irrepressible - determined to sit exams for Oxford, against her conservative parents' wishes. She is encouraged and inspired by her brother and his friends, particularly the brilliant Roland Leighton, who shares her dream of being a writer. But her hopes for Oxford with Roland turn to dust as war is declared, and all the young men enlist; she herself gives up her dream of writing, and becomes a nurse. What follows is a story of heightened, urgent love between Vera and Roland - interrupted by the war, as Vera moves closer and closer to the front, eventually nursing Germans soldiers, who help her to recognise the futility of war. Through Vera we see youthful love buffeted by fatal losses and the overpowering tide of history, as one by one those closest to her are lost to the war. Yet Vera's story is also one of survival, as she returns from the war determined to find a new purpose, and to keep faith with those she has lost, spurring her towards a powerful act of remembrance.

The film follows Vera's rites of passage through war, and through her wartime experiences, we understand how she went on to write one of the defining memoirs of her age, which gave voice to a lost generation. Many elements in the film (such as the key letters from the front and Roland's poems) are authentic, and it's the fact that Testament of Youth is a genuine witness testimony which gives the story its power.