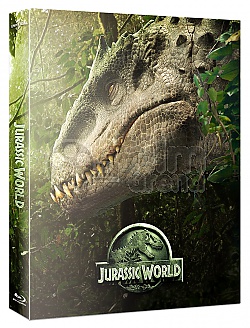 - 2-Disc SteelBook, which contains the movie in 3D, respectively in 2D and bonuses
- WEA FullSlip original packaging, for which again are preparing an attractive finish,
- 3D lenticular magnet with a flip-flop effect Jurassic World Animals
- 32-page PhotoBook full of the most interesting moments from the film Jurassic World
- Collector's character cards with the main protagonists
- Numbered plastic collectible card and of course a holographic sticker with the indication of the number of your Collector's Edition
- And an exclusive poster card with 3D finish!

FAC SteelBook Jurassic World Edition will be available in the amount of 2,001 pieces.

This edition is composed of several pieces of collector components and due to longer production and inspection process may be delayed. Thank you for your understanding.

Twenty-two years after the events of Jurassic Park, Isla Nublar now features a fully functioning dinosaur theme park, Jurassic World, as originally envisioned by John Hammond. After 10 years of operation and visitor rates declining, in order to fulfill a corporate mandate, a new attraction is created to re-spark visitor's interest, which backfires horribly.