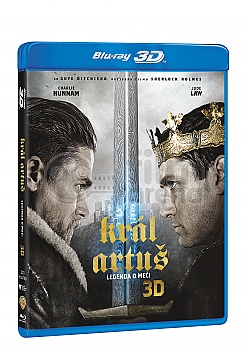 299 CZK
With this product you can buy even more products from this category MULTIBUY Blu-Ray and save 57%!
QuestionReferenceOrder

Robbed of his birthright, Arthur comes up the hard way in the back alleys of the city. But once he pulls the sword from the stone, he is forced to acknowledge his true legacy - whether he likes it or not.

King Arthur: Legend of the Sword

Centuries ago in the Dark Ages, the evil mage Mordred (Rob Knighton) sought great power through the use of dark magic. Mordred and his army make their way to Camelot and begin laying waste to the kingdom of Britain as they ride on the backs of massive war elephants. King Uther Pendragon (Eric Bana) leads his own army against Mordred's forces. Uther rides his horse to reach Mordred's stronghold while wielding his mighty sword Excalibur. With one swing, Uther slays Mordred and puts an end to his reign of terror.

Soon after, Uther's brother Vortigern (Jude Law) leads a coup against Uther and the kingdom. Vortigern takes his wife Elsa (Katie McGrath) underground to a pit where he kills Elsa and spills her blood to achieve a stronger form. Uther gets his wife Igraine (Poppy Delevignge) and young son Arthur out of the castle as Vortigern's minions, the Blacklegs, are closing in on them. As the villains begin causing chaos throughout the kingdom, Uther brings Igraine and Arthur by the docks. A figure approaches the family and hurls a spear at Igraine, killing her.

Young Arthur is sent to the capital city of Londinium and is taken in to be raised in a brothel. As he grows older, Arthur spends his time on the streets, getting into trouble with other children and picking fights with those that harass him. As an adult (now played by Charlie Hunnam), Arthur grows stronger and more cocky and has made friends with Rubio (Freddie Fox) and Percival (Craig McGinlay)

Arthur tends to his friend Lucy (Nicola Wren), a prostitute, who was previously assaulted by a group of Vikings. Arthur is later called to speak to a commander after Blacklegs raid the brothel. Arthur outed a man in hiding named Goosefat Bill Turner (Aiden Gillen), and he got into an altercation with the Vikings for hurting Lucy and forcing them to give up their wages. The commander tells Arthur that those Vikings were protected by the king, and therefore Arthur must pay for his crime. Arthur is taken and put onto a ship with other men headed for the kingdom. The Blacklegs also kill Lucy in front of Arthur and the other prostitutes just to spite him.

Vortigern speaks to the sirens that granted him his power after he killed Elsa. He does not yet have the full power he seeks, and the sirens tell him that once he kills Arthur and takes the power of the sword, he will succeed. Vortigern then learns that the sword has been found in a stone pulled out of the ocean.

Arthur is brought forth to the stone with hundreds of other men as they are forced to attempt to pull the sword out. When Arthur steps out, he slowly feels the sword coming out of the stone. He sees flashes of images and senses a powerful and overwhelming energy that causes him to pass out.

Arthur wakes up in Vortigern's dungeon. The king enters and explains to Arthur just what he had felt. He tells Arthur who his father was and how he is able to wield the sword. However, Vortigern intends to hold the power for himself, so Arthur must be dealt with.

Uther's former general, Sir Bedevere (Djimon Hounsou), is met by a woman known as The Mage (Astrid Berges-Frisbey). She was sent by Merlin to help Arthur.

Voritgern sentences Arthur to execution. The Mage hides and uses her powers to summon hawks to attack Vortigern's men while Bedevere and his men help Arthur get away. They bring him to their hideout, where Arthur awkwardly faces Bill after their previous encounter. Bedevere tells Arthur they need his help in defeating Vortigern, but Arthur refuses to help them. The others then doubt that he really can wield the sword as it was believed. Arthur knows they want him to fight them, and he initially chooses not to, until he sucker-punches Bill and tries to wield Excalibur by himself. This only causes him to faint once more.

Bedevere later explains to Arthur how Vortigern had worked with Mordred the whole time to ensure that Vortigern would ultimately emerge victorious. His ultimate goal is to construct the Mage Tower, which had once been the source of Mordred's power, but if Vortigern completes it, he would be unstoppable. After Mordred rose to power, Uther came into possession of Excalibur from the Lady of the Lake (Jacqui Ainsley), leading him to kill Mordred.

The Mage suggests to Bedevere to take Arthur to the Blacklands, where Merlin had destroyed Mordred's tower, so that he may train to learn how to control the sword. Arthur faces a number of creatures as he attempts to use the sword to his full potential. He receives help from a rebel named George (Tom Wu). As Arthur tries to grasp the power of the sword (literally), he sees a vision of the night his parents were murdered. He sees Vortigern's demonic knight form as he threw the spear at Igraine before dueling with Uther as he sent his son away. Vortigern overpowered him and nearly struck a fatal blow until Uther threw his sword into the air and let it impale him, thus turning him into the stone that held Excalibur and making him sink to the depths of the ocean below. Once Arthur understands his father's sacrifice, he decides to go kill Vortigern.

Arthur and the rebels plan to meet with barons from other kingdoms to have them on their side to confront Vortigern. Arthur helps orchestrate meetings with the barons in the woods, which involves elaborate confrontations among his own men to show the barons that Arthur is someone they can follow.

Vortigern's maid Maggie (Annabelle Wallis) is secretly a spy for Bedevere. She informs the rebels that Vortigern has also met with a Viking baron to form an alliance. The rebels plan to attack Vortigern when he arrives in Londinium. Once Vortigern and his men arrive, the rebels hide in a tower as Bill keeps an eye out. He readies his bow and arrow, only for Arthur to tell him that Vortigern has sent a decoy in his place. Bill still fires his arrow, leading to an attack. The rebels make a run for it, but Rubio gets hurt and left behind while the others take refuge in a school run by George. The Blacklegs attack the school, forcing the rebels to fight back. Arthur sees the Mage being held at knifepoint by a Blackleg. With a mighty swing of the sword, Arthur knocks the Blacklegs back and kills them all.

Chaos breaks out across Londinium that night as the rebels stay in a safe house. Rubio and his son Blue (Bleu Landau) arrive and join their friends. Vortigern's general Greybeard (Mikael Persbrandt) has followed Rubio, leading the two villains to find and interrogate him. Blue runs back for his father, but must pretend not to know him to protect both of them. Vortigern then goes to cut off one of Rubio's ears to see if Blue is telling the truth, but Blue yells before Vortigern passes his blade. He does it anyway as Arthur runs in to get Blue out of there. Blue must watch as Vortigern kills his father as Arthur takes him away.

Feeling like a failure to his men, Arthur throws Excalibur into the sea. He walks through the woods and is pulled into a small pool by the Lady of the Lake. She shows Arthur a vision of what will happen if he does not stop Vortigern - people will die and the kingdom will perish should he achieve his ultimate power.

Arthur returns to meet with Bedevere, George, and Percival. When they get back to their hideout, they find all of their friends and allies dead. Greybeard is there to deliver a warning to Arthur - if he doesn't surrender by the end of the day, Vortigern will kill both Blue and the Mage.

Through a negotiation, the Mage is released when Arthur goes to turn himself and the sword in to Vortigern. Before anyone can harm Arthur, the Mage summons a giant snake to come in and eat Greybeard and the other Blacklegs. The rebels then go to free the rest of Vortigern's prisoners and begin to battle the Blacklegs.

Knowing what's about to happen, Vortigern takes his daughter Catia (Millie Brady) down to the pit to sacrifice her and regain his demonic form. He brings Arthur to a completely different realm and fights him. Arthur puts up a good fight but is ultimately overpowered by Vortigern. Arthur then sees the vision of Uther before his death, with Arthur standing before his father. Before the sword hits Uther, Arthur grabs it, and Uther tells him it is time for him to wield Excalibur. Arthur continues the fight and tells Vortigern that everything that has brought Arthur to this moment is all thanks to Vortigern himself, due to his actions instigating Arthur to come fight. Arthur destroys Vortigern's blades and impales his treacherous uncle. Arthur leaves Vortigern with his dying breaths as the mage tower collapses.

A while later, Arthur is seen constructing the Round Table. He knights George and Percival while keeping Bedevere and Bill in his circle. Arthur also cuts ties with the Viking baron and his men to avoid further conflicts. The Vikings peacefully kneel before the new king. Arthur is then presented with his crown as he goes to face his kingdom. The people cheer as Arthur raises Excalibur in the air.