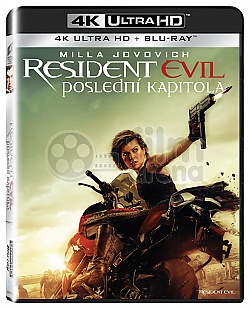 Picking up immediately after the events in Resident Evil: Retribution, humanity is on its last legs in Washington D.C. As the only survivor of what was meant to be humanity's final stand against the undead hordes, Alice must return to where the nightmare began - Raccoon City, where the Umbrella Corporation is gathering its forces for a final strike against the only remaining survivors of the apocalypse.

In a race against time Alice will join forces with old friends, and an unlikely ally, in an action packed battle with undead hordes and new mutant monsters. Between regaining her superhuman abilities at Wesker's hand and Umbrella's impending attack, this will be Alice's most difficult adventure as she fights to save humanity, which is on the brink of oblivion.

The final battle between Alice and the Umbrella Corporation to prevent end of the world has just begun. Now, the global is filled with undead and human race is facing total extinction. Alice (Milla Jovovich) teams up with Leon Scott Kennedy (Johann Urb), Jill Valentine (Sienna Guillory), Ada Wong (Bingbing Li) and her unlikely ally Albert Wesker (Shawn Roberts) who has now betrayed Umbrella with Ada to save the world from this deadly viral apocalypse. Alice and her group travel back to where it all began: The Hive located underground in the ruins of Raccoon City to find the cure for this deadly viral apocalypse.