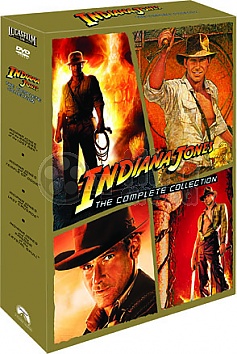 Indiana Jones, famed adventurer and archaeologist acquires a diary that holds clues and a map with no names to find the mysterious Holy Grail- which was sent from his father, Dr. Henry Jones, in Italy. Upon hearing from a private collector, Walter Donavan, that the mission for the Holy Grail went astray with the disappearance of his father, Indiana Jones and museum curator Marcus Brody venture to Italy in search of Indy's father. However, upon retrieving Dr. Henry Jones in Nazi territory, the rescue mission turns into a race to find the Holy Grail before the Nazis do- who plan to use it for complete world domination for their super-race. With the diary as a vital key and the map with no names as a guide, Indiana Jones once again finds himself in another death defying adventure of pure excitement.

The story opens in Monument Valley, Utah, in 1912. A troop of Boy Scouts are exploring the area. One of the Scouts, Indiana Jones, finds a cave where where a party led by a mercenary wearing a fedora and leather jacket finds the cross of Coronado, a priceless Spanish American artifact. Indy, believing it belongs in a museum, takes it and is pursued, attempting to escape by horseback. He is followed by the mercenaries in autos, but boards a circus train to elude them. While on the train, he crawls through a car full of snakes (thereby providing the backstory for his reptilophobia) and then finds himself in a car with a lion, from whom he escapes by using a bullwhip he finds hanging on the wall, in which his first attempt backlashes and gives him a cut on his chin (explaining the origin of his scar, a real scar borne by actor Harrison Ford). After a few more dangerous encounters, including a near castration by the horn of a rhinoceros annoyed by the tussle on his roof, Indy gets the cross home, where his father is busy working on drawing what looks like a stained glass window. When Indy excitedly tries to tell his father about it, his father rebuffs him, telling him to calm down by counting to 10 in Greek.

Moments later a fellow scout whom Indy had sent for the Sheriff when he discovered the illegal dig returns with the lawman; but he is dismayed to find that the burly businessman wearing a panama hat who had hired the mercenaries had also bought the law, and Indy is forced to surrender the cross to the looters. However, before the head mercenary leaves the house, he says to Indy "You lost this time, Kid, but you don't have to like it",and puts the fedora on the boys head. As Indy smiles the scene fades and the scene changes to 1938 aboard a freighter in a violent Atlantic storm. Indy has tracked down the cross, but is again confronted by the man in the panama hat and his henchmen. He grabs the artifact, fights off the crew and dives into the ocean scant seconds before a massive wave collapses the ship's funnel, causing it to fall onto a load of explosives. As Indy grabs a life preserver from the wreck, he sees the panama hat floating by. As the hulk of the ship sinks, the name is visible on the bow: Coronado.

Indy returns to his university and after a moment of comic relief almost identical to the similar scene in "Raiders of the Lost Ark" gives the artifact Marcus Brody for the museum, then goes to his office, where he is surrounded by a phalanx of students. His secretary Irene gives him a ream of papers to be graded as well as phone messages and a brown paper package from Venice, which he puts in his pocket. After sitting for a moment in his artifact cluttered office, he sneaks out through his window but is greeted by three men who step from a sinister black sedan. They ask him to accompany them to what seems to be an elegant penthouse apartment in an unnamed city. This is the home of Walter Donovan, a generous donator to the museum. Donovan is apparently an oil magnate whose drilling team has uncovered fragment of a stone marker dating to the 12th century. The marker is read by Indy, and to his surprise it details "the cup that holds the blood of Jesus Christ" - the Holy Grail, whose waters can grant immortality. Donovan's project leader has deduced that a second marker, left behind by a knight who had found the Grail, is somewhere in Venice, but a major snag has occurred, as the project leader and all his research have vanished, to the concern of his assistant, Doctor Elsa Schneider.

To Indy's surprise, his father is Donovan's project leader, and when Indy and Marcus find Henry's house ransacked and his mail opened, Indy suddenly remembers the package he got from Venice - his dad's diary, in which is all his father's research on the Grail.

Indy and Marcus fly to Venice, where Donovan has arranged apartments for them, and they meet with Schneider. She gives them a written note by Henry that contains only the Roman numerals for three, seven, and ten, then the group goes to where Henry disappeared, the Venice library, which was once a church in ancient Roman times. A glass painting dating from the sacking of Byzantium gives Indy a clue that the library is the tomb of the knight. Indy pries open the floor and finds a network of tunnels containing oil. Exploring the tunnel with Elsa - and in the process passing a wall painting of ancient antiquities such as The Ark Of The Covenant - Indy finds an ancient casket and a knight's shield, the second marker.

However, Marcus is slugged by members of a cult sworn to preventing discovery of the Grail, and who have followed Indy from the States; the cult sets fire to the oil in the tunnels but Indy and Elsa escape through the city sewers. Indy and Elsa are pursued by the cultists on speedboats before Indy dispatches one boat and corners the group's leader and learns from him that Henry is held in a castle in Germany.

Later, after drying out, Indy arranges for Marcus to meet Sallah to begin finding the Grail while he and Elsa go after Henry. He finds that his room and Elsa's have been ransacked by men looking for the Grail diary, making him all the more determined to find Henry and also the Grail. The two fly to the German castle and Indy finds Henry, but both are double crossed by Elsa, and to both men's horror they find that the string-puller in this whole affair is Walter Donovan, who wants the ancient cup to give him immortality. Indy and Henry are bound in the castle but Indy manages to break out, in the process setting off a fire. He and Henry commandeer a Nazi motorcyle and escape pursuing German soldiers, but Henry stops Indy's trek of escape to make him go back to Berlin, where Donovan and Elsa have taken his diary for Hitler. When Indy demands to know why the diary is so important, Henry explains that it details traps that protect the grail and keys to defeating them. Indy also confronts his father about his obsession with the grail and receives a slap from his father when he blasphemes.

Indy and his father trek to Berlin, finds Elsa standing with Hitler and his highest staff at a Nazi party book burning. Indy retrieves the diary, in the process tempted to strangle her. During his departure from the rally, Indy comes face-to-face with Hitler himself, who adds his signature to the book.

Indy and his father got to the Berlin Flughafen to escape. Indy books tickets aboard a dirigible. However, they are forced to leave the dirigible using the search plane attached underneath. They are chased by Luftwaffe fighters and are forced to land when Indy's father shoots the tail off their plane with it's machine bun; they escape one plane that crashes into a tunnel, then Henry "suddenly remembers my Charlemegne" that drives him to send seagulls flying into the path of the second fighter, which flies into the swarm and crashes.

Reaching the desert area of Jordan, Indy and Henry rendezvous with Indy's pal Sallah, where they learn that Marcus, whom Indy had given a map from the diary leading them to the Grail itself, was captured by Nazi agents and taken to Donovan. Tracking down Donovan's exploration group, Indy, Henry, and Sallah see it is escorted by a company of Nazi troopers with a World War I-vintage tank. When desert guerrillas led by the group that attacked Indy in Venice ambush the convoy, Henry uses the cover to try and rescue Marcus, but both are seized by the Nazis. Indy pursues the tank and a prolonged fight ensues where Marcus and Henry attack the soldiers inside and by a mixture of clumsiness and force succeed in killing them, then use the tank to blast the convoy. Indy rescues the two of them but the tank drives off a sheer cliff, Indy barely escaping.

The four men soon track down Donovan's remaining group at a cliffside temple (Petra) in which is the path to the Grail. The traps within have already killed several of Donovan's group, and when Indy and his pals are seized, Donovan sees Indy as his chance. To force Indy to find the Grail, Donovan shoots Henry, leaving the healing power of the Grail as the only chance to save Henry's life. Indy thus enters the dangerous pathway, deducing how to avoid its traps and finding the chamber of the Grail. He succeeds in reaching the grail chamber and must choose the correct grail from many false ones.

However, Donovan and Elsa enter before he can, and Elsa chooses a cup for Donovan. She knows it is an incorrect choice, and Donovan ultimately ages to death for drinking from the wrong grail. Indy then picks the true grail, drinks from it proving it to be the true one and is warned by the and uses it to heal Henry's wound. All is settled until Elsa decides to leave with the grail, setting off a mammoth quake inside the vast temple. Elsa hits the ground and the grail rolls into a large fissure in the temple. Elsa almost falls in herself, but is saved by Indy at the last moment. Elsa, instead of letting Indy lift her up, pulls one of her hands free to try and reach the grail resting below her. She can almost touch it, and so she keeps on reaching, despite Indy's pleads to give him both her hands. He cannot maintain his grip on Elsa's slippery leather gloved hand, and before Elsa can grasp the cup, her hand slips out of its leather glove. Elsa falls to her death and Indy near does too, but his father catches him. Indy tries to reach the grail himself, but Henry gets through to him and the two ultimately escape the temple. When Jones Sr. calls Indy "Junior" Sallah asks what it means. Jones Sr. tells him Indy's full name "Henry Jones, Jr" a moniker that Indy himself detests. Jones Sr also reveals that "Indiana" was the name of their dog when Indy was a child. Sallah finds the revelation very funny. Led by a victory cry from the inept Brody, the four then ride off on horseback into the sunset.