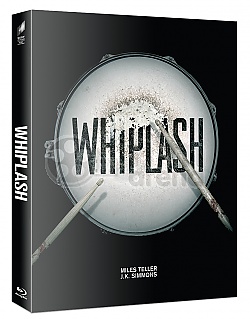 A young and talented drummer attending a prestigious music academy finds himself under the wing of the most respected professor at the school, one who does not hold back on abuse towards his students. The two form an odd relationship as the student tries to achieve greatness, and the professor tries to stop him.

The films opens with Andrew Neimann (Miles Teller) playing the drums at Shaffer Conservatory of Music, the music school in USA and he but he's just an alternate drummer in some school band. Andrew abruptly stops playing drums when he band conductor, Terence Fletcher (J.K. Simmons) appears at the door in front of him and asking Andrew some personal information of him. When Fletcher asking Andrew why did he stop playing, he resumes playing drums. After finishes playing, Terence says did not mean to resume playing then he ask Andrew to show his rudiments by playing the drums again. While Andrew playing drums, Fletcher slams the door off but he comes back to retrieve his forgotten jacket.

The next day, Andrew enters one class aside from Fletcher and there, he meets the drummer named Ryan Connelly (Austin Stowell). Shortly, the professor arrives and the class performs "Billy's An". Andrew sees the man (presumably Fletcher) in silhouette looking at the door. After the class, Andrew peeks one of the classroom where the class is handled by Fletcher and he is being looked by Fletcher.

Later, back at the Studio Band, Andrew playing drums as a core drummer. Suddenly, Fletcher breaks inside and Andrew becomes horrified of him. Fletcher conducts every saxophonist and bassist one by one and finally the drums. After that, Fletcher tells Andrew to come and he is told to come at his room tomorrow at 6 in the morning.

Andrew meets Nicole (Melissa Benoist), the girl working at the cinema and invited her to go with him. The next day, Andrew realizes that he is late for the class. Andrew struggles and rushes quickly to the school, only he goes inside the classroom empty. Andrew knows that it is actually starts the class at 9am. Andrew waits three hours before the class. At exactly 9:00:00am, Fletcher arrives and begins conducting the song called "Whiplash." In the process of band practice, Fletcher suddenly yells at a saxophonist playing out-of-tune and angrily tells him to get out of the Studio Band. This escalates Fletcher's abusiveness and wrath. Fletcher take the class a break.

After the break, the class resumes. But when Fletcher losing the patience of Andrew's drum tempo, Fletcher throws a chair on Andrew (but he avoided). Fletcher slaps Andrew every four counts he made and he will not stop questioning until Andrew answers whether "dragging" or "rushing". Andrew answers "rushing" then Fletcher forced Andrew to tell the whole band that he is really upset, louder! Fletcher then mocks and insults Andrew about separating his parents. Once again, Fletcher tells Andrew that he is upset, louder. Thus, Andrew is being embarrassed and insulted.

At his home, Andrew keeps practicing drums, bleeding his hand in the process. After the band performs at the competition, Tanner (Nate Lang), core drummer, left his music sheets to Andrew, who neglects it for two seconds. Andrew neglects the music sheets to buy a can of coke at the automated vending machine. As Tanner is looking for his music sheets, it mysteriously disappears. Tanner can't play without the sheets. Andrew steps in, stating he knows the song, Whiplash, by heart. Andrew plays well and earns Tanner's spot. Thus, Andrew is the new core drummer. Andrew's family is having a dinner at his home and talks about his experience in Shaffer.

At the Studio Band, the band practicing the new song called "Caravan" which needs an extreme time stamp measure of 330 bpm. Fletcher dismisses the band except Andrew when Fletcher discusses him about that note. Shortly, Ryan Connelly, whom Andrew met from the other class, arrives. Andrew plays the drum to test the ability of the tempo but his tempo fails while Ryan plays good. Therefore, Fletcher takes Ryan as the new core drummer, but Andrew does not agree of this. Jealous, Andrew will be the core drummer if he earns the part.

Andrew breaks up with Nicole, saying his ambition will only hinder their relationship. At his home, we see Andrew practicing drums harder with a pitcher of water with ice beside him in case he bleeds. As he fail to reach the required tempo, Andrew punches the drum in frustration and his hand is bleeding, dripping it in the pitcher of ice.

At the Studio Band, Fletcher tearfully reveals in class that a talented former student of his, Sean Casey, has died in a car accident. The band rehearses "Caravan", but Carl struggles with the tempo; Fletcher auditions Andrew, Ryan and Carl for hours while the class waits outside but the three fail to reach the required tempo. When it is now Andrew's turn, Fletcher kicks the chair then throws the drum away and he even told Andrew to increase the more tempo. In this process, Andrew's left hand is bleeding and the blood drips onto the drum set. After a one minute of playing, Fletcher finally give Andrew a remark that he earned the part.

On the way to a jazz competition, the bus that Andrew rode breaks down. So Andrew rent a car but he arrives late for rehearsal without his drumsticks. He drives back to the car rental office and retrieves the drumsticks, but as he speeds back, his car is hit by a truck. He crawls from the wreckage and despite his injury and bloodied face, he struggles to make into the jazz competition. With his left hand injured, he is unable to play and drops the drumstick to the floor. After that, Fletcher says Andrew that he is done. Andrew attacks Fletcher in front of the audience.

Andrew is expelled from Shaffer and contacted by a lawyer representing the parents of Sean Casey. The lawyer explains that Sean actually hanged himself, having suffered anxiety and depression after joining Fletcher's class. Sean's parents want to prevent Fletcher from teaching; Andrew agrees to testify and Fletcher is fired.

Andrew goes to the club where he sees Fletcher and the jazz performers. As the song ends, Andrews walks out of the club but Fletcher calls him and having a chat with Fletcher. Fletcher explains that he pushes his students beyond the expected so they might achieve greatness. He invites Andrew to perform at JVC festival concert with his band. Andrew agrees and invites Nicole, only that she has a new relationship.

On stage, Fletcher tells Andrew he knows he testified against him, and in revenge, leads the band in a new piece Andrew was not given sheet music for. Andrew leaves the stage humiliated, but returns and begins playing "Caravan", interrupting Fletcher as he addresses the audience. The rest of the band joins him, and Fletcher follows suit. Andrew ends the performance with an extravagant drum solo. Fletcher is at first angry, but gives a nod of approval to Andrew as he finishes.